I’d like think of myself as a pretty spiritual guy. Between my martial arts, yoga, meditation and natural healing studies, you can imagine that this holy symbol has a lot of relevance in my life. Below is one of my attempts to express it’s significance to me. It was painted with Ink using a Chinese Calligraphy brush. The background was light pencil outlines and watercolors on paper. 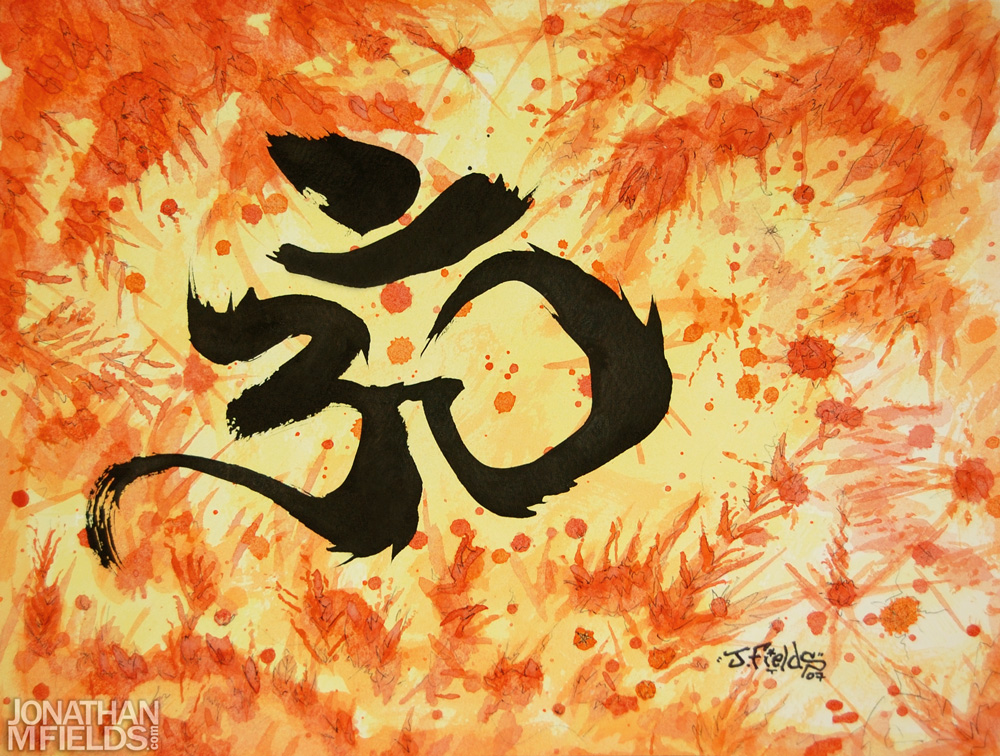 When I’m not practicing my mantras, you can find me plugging away at
Search Engine Marketing Pros
or
A1A DJs playing parties across the USA.

aum (help·info) (written universally as ॐ; in Devanagari as ओं oṃ [õː], औं auṃ [ə̃ũ], or ओम् om [õːm]) is a mystical Sanskrit sound of Hindu origin, sacred and important in various Dharmic religions such as Hinduism, Buddhism and Jainism. The syllable is also referred to as omkara (ओंकार oṃkāra) or aumkara (औंकार auṃkāra), literally “om syllable”, and in Sanskrit it is sometimes referred to as प्रणव (praṇava), literally “that which is sounded out loudly”.

Om is also written ओ३म् (ō̄m [õːːm]), where ३ is प्लुत (pluta, “three times as long”), indicating a length of three morae (that is, the time it takes to say three syllables)—an overlong nasalized close-mid back rounded vowel—though there are other enunciations adhered to in received traditions. It is placed at the beginning of most Hindu texts as a sacred incantation to be intoned at the beginning and end of a reading of the Vedas or prior to any prayer or mantra. It is used at the end of the invocation to the god being sacrificed to (anuvakya) as an invitation to and for that God to partake of the sacrifice.. The Māndukya Upanishad is entirely devoted to the explanation of the syllable. The syllable consists of three phonemes, a (Vaishvanara),[1] u (Hiranyagarbha), and m (Ishvara), which symbolize the beginning, duration, and dissolution of the universe and the associated gods Brahma, Vishnu, and Shiva, respectively.[2] The name omkara is taken as a name of God in the Hindu revivalist Arya Samaj and can be translated as “I Am Existence”[citation needed].