Jonathan started his journey as a martial artist at a very young age.  He is currently the chief instructor and 4th Dan Black Belt under Master Jean Phoenix Le Grand at Lost Legacy Systems Mixed Martial Arts in Coconut Creek, FL  where he has been training & teaching since 2004. Most recently, he’s been teaching professional fighters from the UFC &  Team Legacy Amateur MMA competitors.

In 2016, he visited and trained at the original Shaolin Temple in China. In 2015, featured on the #1 Local News Entertainment Show, “Deco Drive”. In 2011, he had the honor to DJ & demonstrate self-defense techniques for the daughter of Bruce Lee, Shannon, at an event commemorating her Father on his Birthday.  Scroll down for videos. 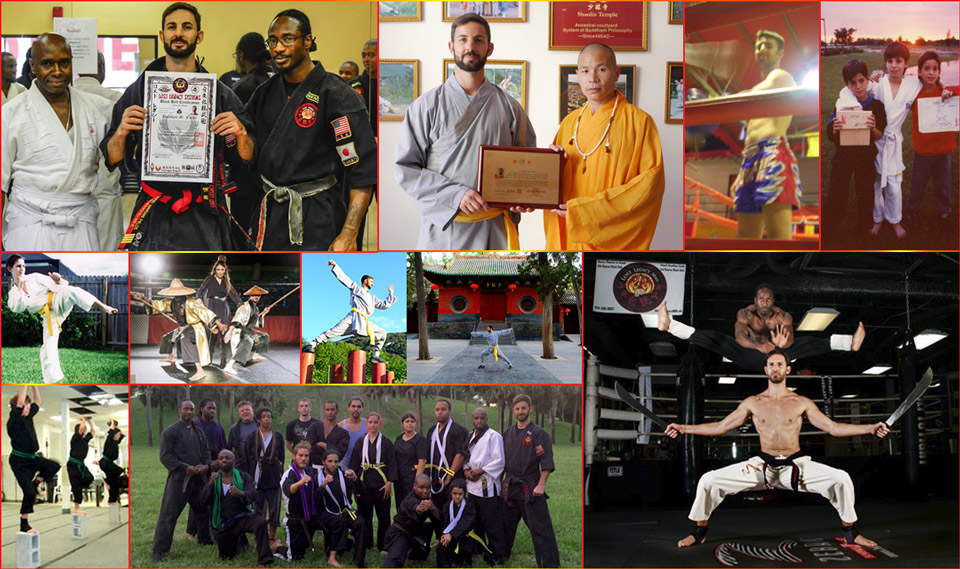 In 2014, he enrolled to become a Doctor of Oriental Medicine and Acupuncture Physician at the Atlantic Institute of Oriental Medicine in Ft. Lauderdale, FL. In 2016, he made pilgrimage to the original Shaolin Temple in China and studied under Grandmaster Shi Yan Jun of the Songshan Shaolin Traditional WuShu Academy. 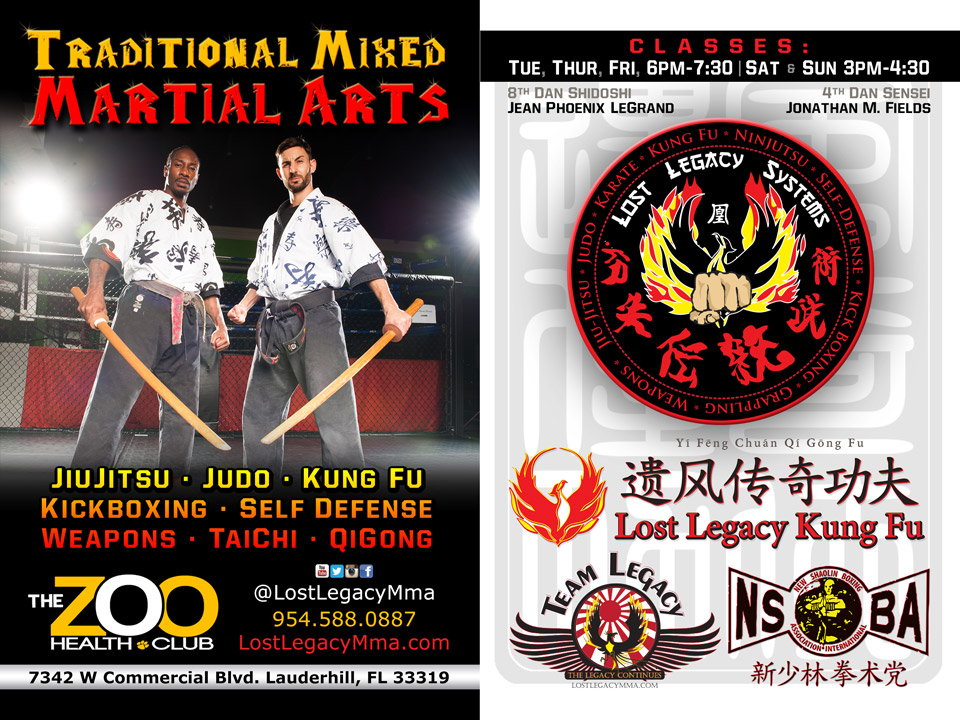 Below you can find Videos from our classes and other projects involving Martial Arts. More mma photos and videos coming soon…

Flyer and press links and articles are listed below. 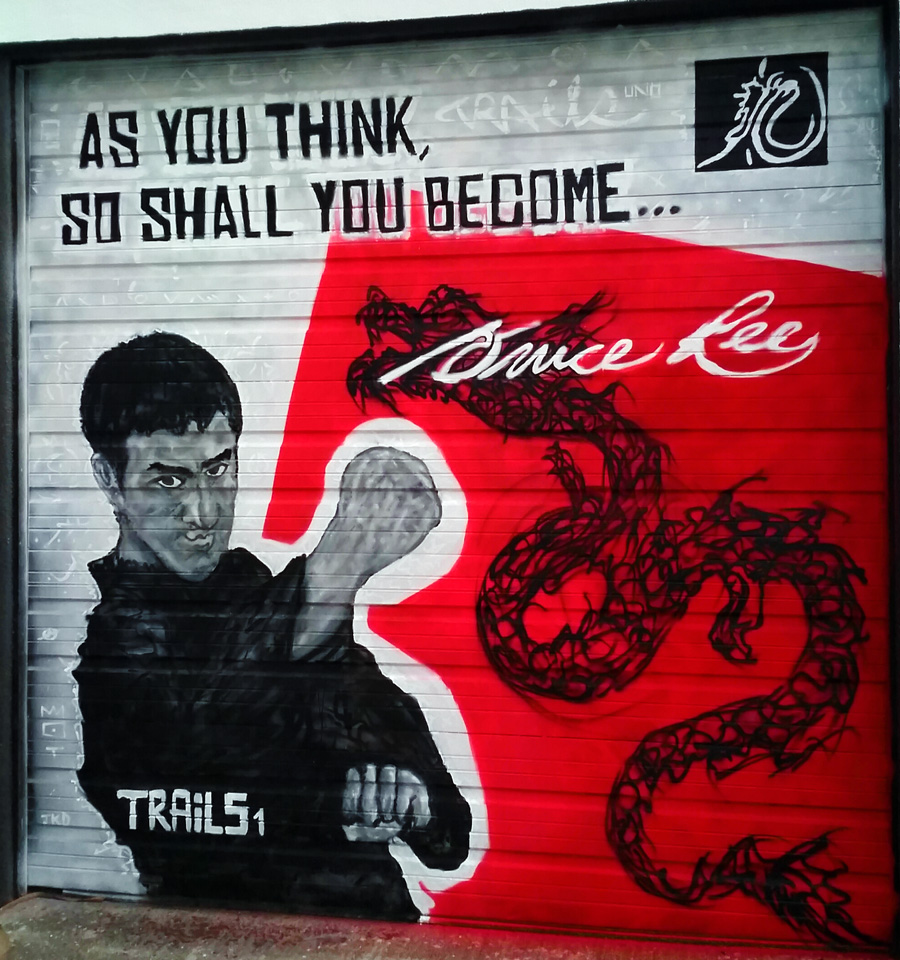 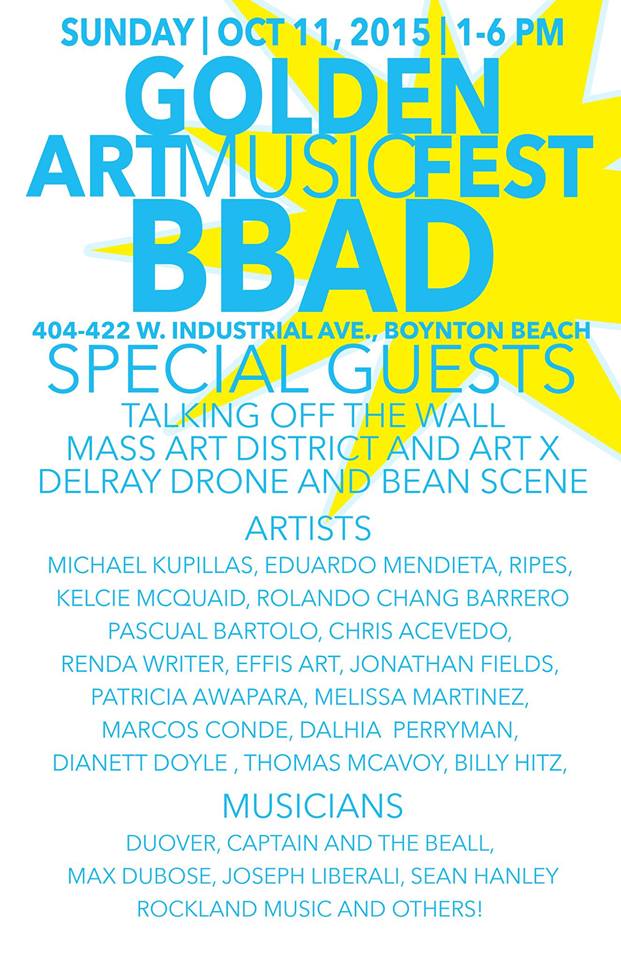 Link to Sun-Sentinel News Article about the event.

Link to New Times Article about the event.

This event was fantastic overall and featured one of a kind drone aero-art performance. Basically, live painting with a drone, a bunch of bands, live music, poetry, open art galleries, food trucks, vendors and 12 artists painting live street art murals in South Florida. It’s not Wynwood, but the West Palm Beach Art Scene can definitely hold its own. Big ups to Roland Chang Barrero for creating the district and everything hes done for the community and the arts in West Palm Beach, FL. This man has literally built the whole district from scratch and has helped countless numbers of South Florida Artists. Over the last 4 years, Miami Street Artist Trails1 has had his graffiti murals from the Boynton Beach Art District receive media attention in various newspapers, magazines, online blogs and television segments. It has also been the backdrop to all the live event and music as his last two murals were featured at the entrance to the South Florida Art District. 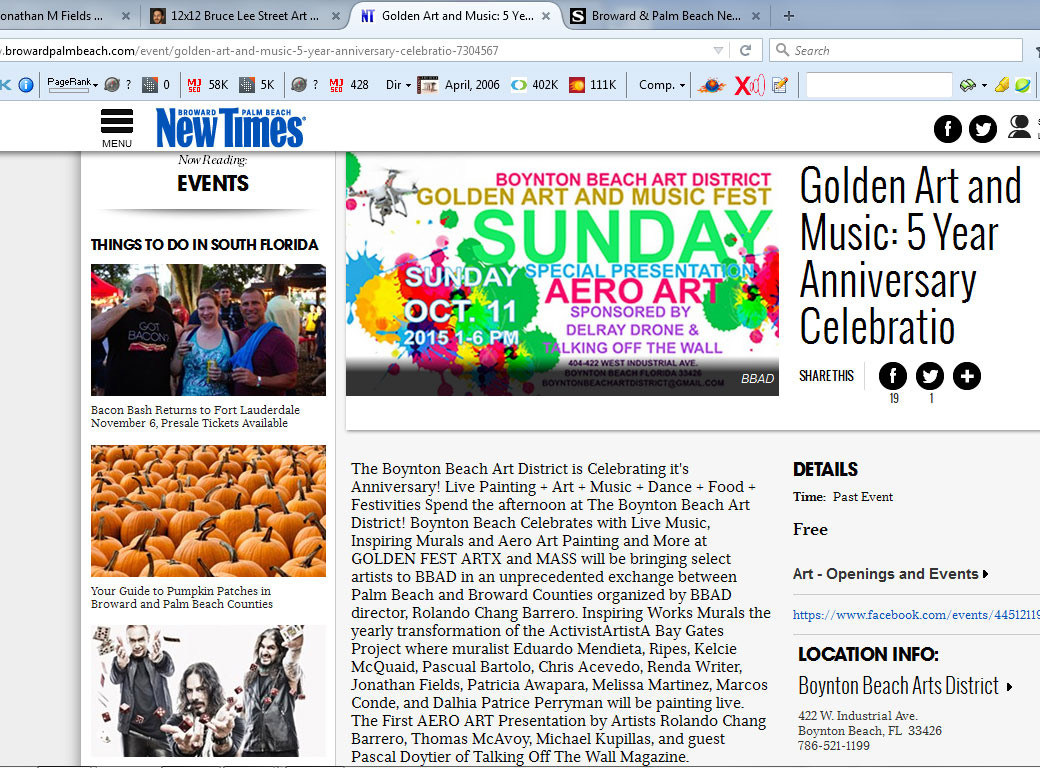 Besides having the honor of helping to organize this event for the last 17 years, this was the first year Lost Legacy got to do an MMA demo to represent our Pompano Beach Martial Arts school. I hope you enjoy the video and feel free to visit us anytime at the dojo… OUS!

In November of 2011, I was blessed and honored to be able to perform for Shannon Lee, Bruce’s daughter, who was hosting the event and promoting their plans to open a museum in Seattle. I was originally booked to DJ this awesome event and one of my Martial Arts students, Chris Campbell happened to show up for the Poppin’ Dance Battle. Last minute, I decided to do a completely Freestyle Jeet Kune Do. We did not practice or have anything pre-arranged. 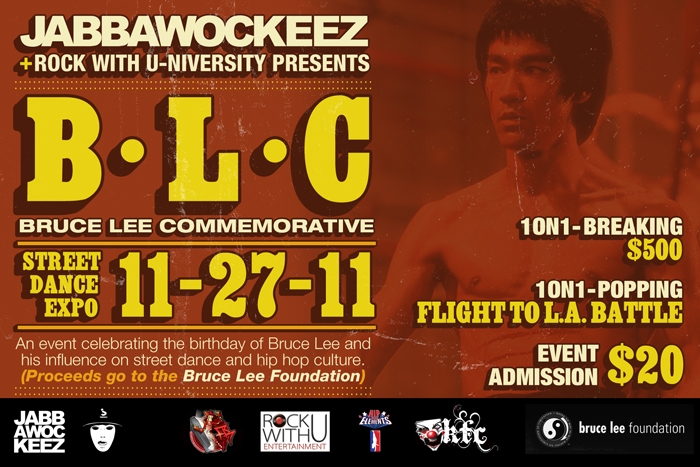 For more info about the museum and the legacy, visit: www.BruceLee.com 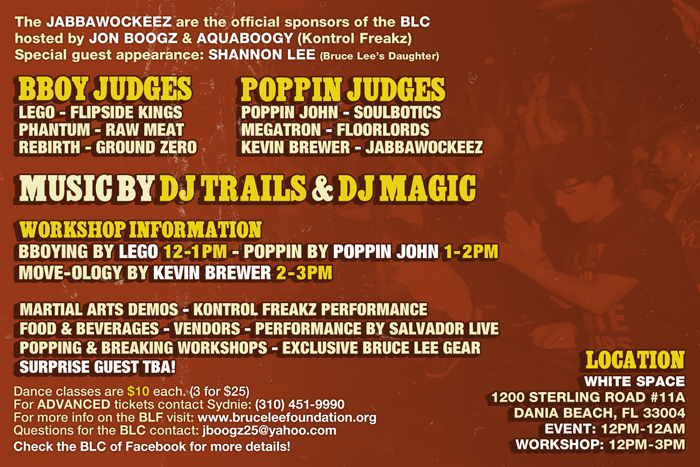 Posted by Jonathan on October 24, 2012 in Blog, Events, Health, Martial Arts | Comments Off on Abz of Adoniss MMA Demo

Our MMA School was invited to demo at this event. We did a 20+ minute show with 7 martial artists. My Sensei surprised me by presenting my 3rd Degree Black Belt after the show. 8+ years in the making. 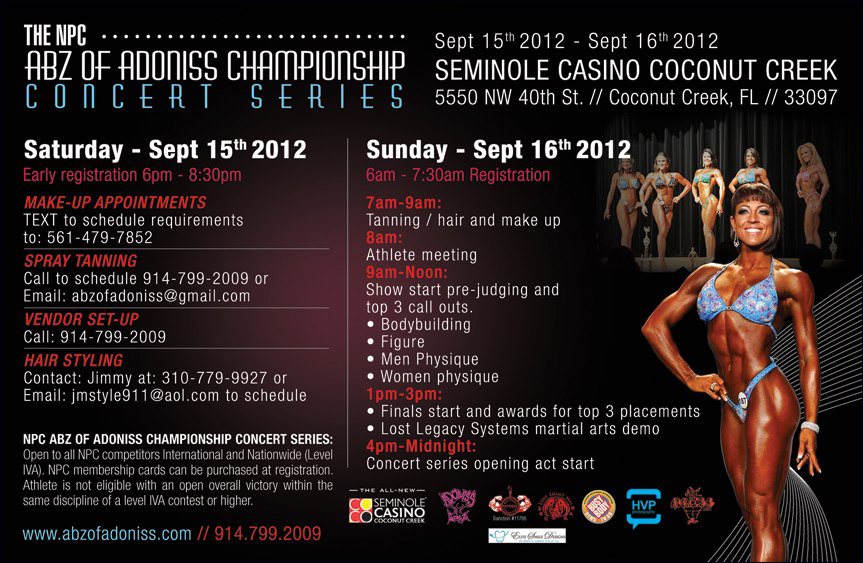 LOST LEGACY MMA will be at the Seminole Coconut Creek Casino on September 16th from 10am to 4pm promoting our school and putting on a musical demonstration at 1pm. Please bring some friends with you and enjoy the show! The event actually ended up being held at the Deerfield Beach Hilton. 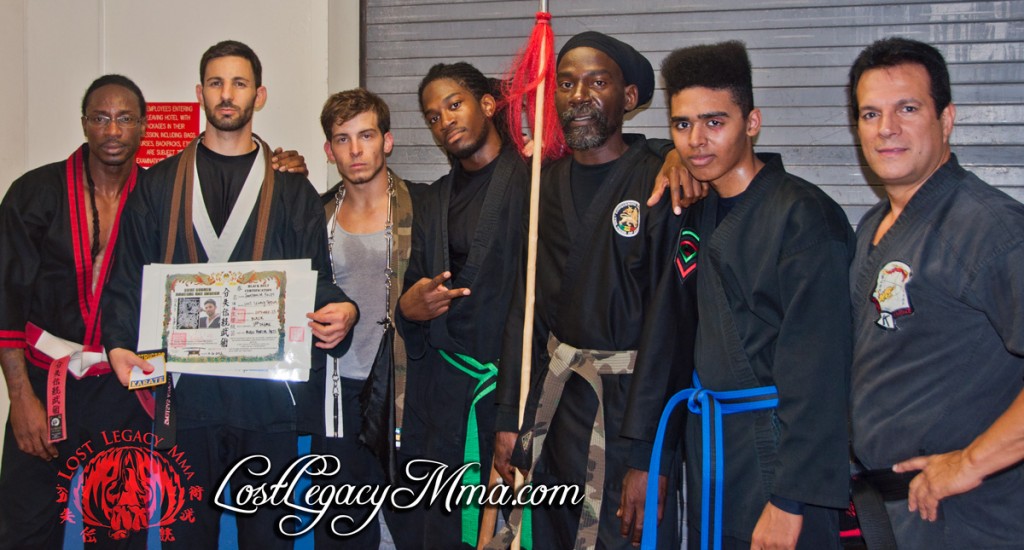 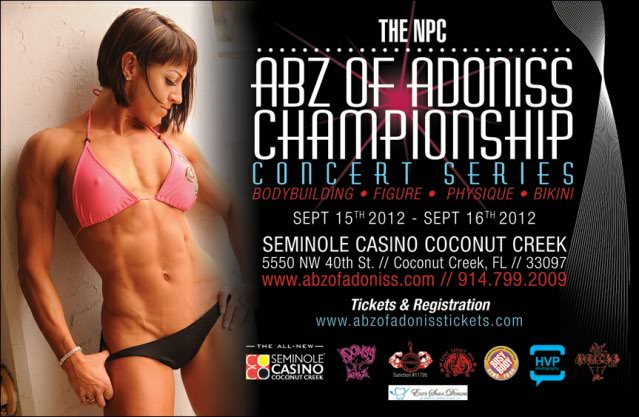 If there are more specific vendor/sponsor rates required contact the promoter
James Davis at: 914-799-2009 or abzofadoniss@gmail.com

This is the second web design I have completed for the Lost Legacy Systems MMA school over the past 7 years.  The website is pretty cool because the image slider on the homepage shows photos, videos and links to blog posts. It also has an easy contact form on the right and all the new social media icons at the top. We are slowly filling in content, but the website has all the bells and whistles. END_OF_DOCUMENT_TOKEN_TO_BE_REPLACED

Posted by Jonathan on December 27, 2011 in Blog, Martial Arts | Comments Off on Lost Legacy MMA Videos

A few videos from the old dojo….

Posted by Jonathan on December 12, 2011 in Martial Arts | Comments Off on MMA Techniques – Self Defense – Grappling

Core work out training, two stand up techniques and 2 on 1 grappling highlights.
I produced the music on this clip as well. 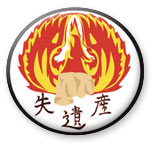 The old Lost Legacy MMA School logo needed to be re-designed. Since I am an instructor at the school for the last 5 years and an artist that has been in charge of all our marketing for almost 7 years, it was only natural that I would be the one to redo the logo design. I took out some of the colors, added my own hand drawn calligraphy / Japanese Kanji, and put the Lost Legacy MMA on top. For a little fun, I added some flames inside the logo as well and dropped it on a black background to make it more dramatic… END_OF_DOCUMENT_TOKEN_TO_BE_REPLACED

I recently had the honor to DJ and perform a Mixed Martial Arts demonstration at the Bruce Lee Commemorative event on his birthday. The event was hosted by Bruce Lee’s Daughter, Shannon Lee, Aqua Boogie and Jon Boogz. It was sponsored by the Jabbawockeez and was intended to help raise funds for the Bruce Lee Foundation, which is trying to erect a Bruce Lee museum in Seattle, WA.  I will be posting a video of my MMA demo shortly.  I offered to donate my original illustration and Bruce Lee T-Shirt design to the foundation in support of the museum. The JKD – Jeet Kune Do Logo and the character were original drawings of mine done with a Chinese Calligraphy brush and ink on paper. The temple in the background is from a photo I took in Bangkok, Thailand and the rest was put together with my Graphic Design skills. I’m waiting to hear back if they are going to use it or not… 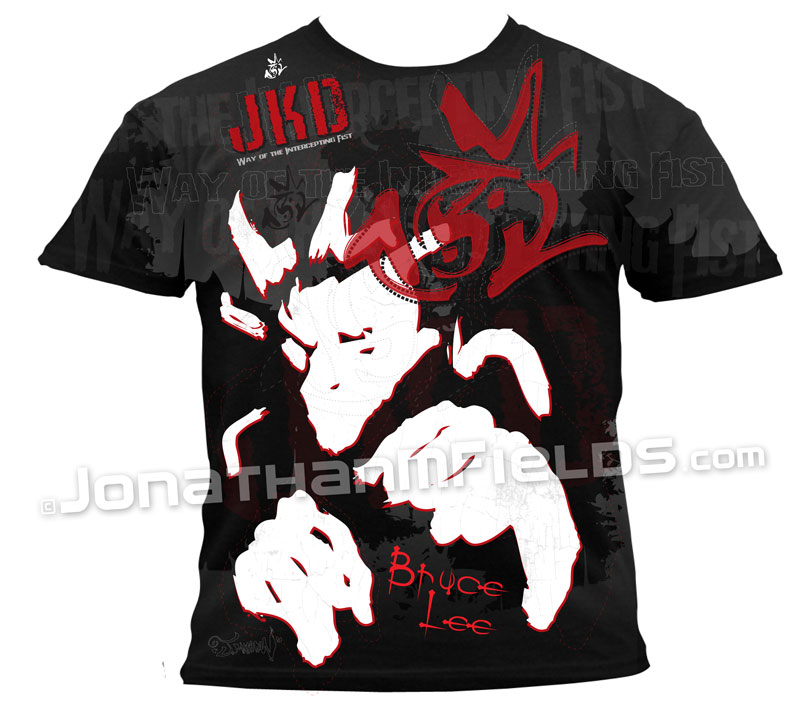